Only (5) prototypes were built, with only (1) such that was actually flight tested – The Sack AS-6 was a revolutionary design Aircraft first devised in 1940 – but not flown until late 1944. Designed by Civilian Engineer Albert Sach, the prototype of 1944 was seen as a success. The Aircraft used a design with gave it a completely circular wing design. The prototype was however, completely made of wood. It is unclear if another prototype made of steel or aluminum was ever constructed. When Allied Forces were moving through Brandis, Germany – it is thought that Sack destroyed all designs before they fell into Allied hands. Only design drawings kept elsewhere survived The War. The AS-6 was 21-feet in length. The diameter of the ''wingspan'' was 17-feet. Power was provided by a single Argus 10C-3 V-8 Engine which produced 240-HP. Speed of the last ''test'' was unknown. The Fighter (as it was envisioned) to be crewed by a single Pilot. Armament was never developed. 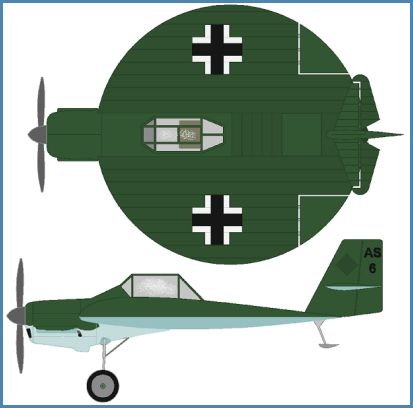