An ''advanced'' German Luftwaffe Training Plane from 1936 – The Bu-133 was used to circumnavigate the imposed World War I Treaty of Versailles. A single-seater, Bi-winged Aircraft, The BU-133 was a wood and steel framed (fabric covered) construct. A superior handling Trainer, this was the last of the ''Twin Winged'' Trainers used by Germany prior to World War II (1939).

The Aircraft was used in civilian applications well into the 1960s. With many still still found in use today (flyable Museum versions). Exported to many Countries, Nationalist Spain modified The Bu-133 into Fighters for use during The Spanish Civil War of the mid-1930s. The Bu-133 was 2—feet long with a multi-wing span of 22-feet. They were powered by a single Siemens-Halske 9-cylinder Engine, capable of 160-HP. Airspeeds were rated at 140-mph with a 15,000-foot operational ceiling. 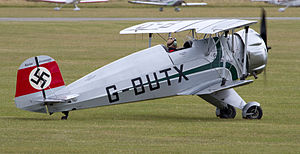