A strange side story of World War I – ''Tirpitz'' was once the Mascot of the Crew of The Imperial German Battleship ''Dresden''. It was common for Crews to ''Mascot'' various Bovines and related as ''pets'' prior to using them for fresh food. ''Tirpitz'' was a 30-pound pig destined to be bacon. It was during The Battle of The Falkland Islands (1914), that ''Dresden'' was struck by British Ships. ''Tirpitz'' was rescued from The Sea by The British Navy and likewise ''kept'' as a survivor of the battle (and seen as good luck). Transferred to shore, ''Tirpitz'' would also serve as a Charity Fundraiser (being auctioned off for food) in 1919. Various body parts (bone) would be made into trophies with several Carving Knife handles still on display in The Imperial War Museum. 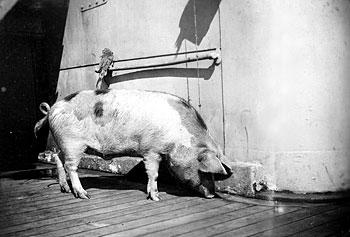