The Kett Rebellion (named for Leader Robert Kett) was a short lived period of conflict fought in Norfolk, England in 1459 AD. King Edward VI decided to repossess large tracks of lands (farms. etc). These lands (while farmed by Tenant Farmers), were nonetheless owned by Nobles. Most Tenant Farmers were also Subsistence Farmers who relied on such farms to feed their Families as well as making an income by selling off excess. By Edward having these lands re-tasked for the primary goal of grazing beef and related animals – Crop harvesting would end. Destitution was seen as the only viable option for The Tenant Farmer.

Groups of Farmers began to plead with local Magistrates, but these pleas fell on deaf ears. Pressed into a ''no win situation'', these Groups decided to resist The King. An Army was born. An Army that would rise to a total of 16,000 effectives. Determined to retake farms already lost and (if necessary) ''remove'' The King himself, this ''Commoner Army'' began it;s march North.

The ''Army'' was somewhat well armed (if poorly trained). Primitive Musket, Cannon, Pike and Sword – all were included. Still, many in The Army did not wish War or ill towards The King. They only wanted guarantees of some lands (not all) ''protected'' from seizure. In addition, this document required all ''Tenant'' and Indentured Servitude as a result, be abolished). A document of ''29 Grievances'' were drafted and sent (under Truce), to The King. His response was to set loose His Royal Army of 12,000 Soldiers supported by 1,200 German Mercenaries. They marched towards Norfolk (where it was reported The Rebel army was preparing to besiege).

The City was devoutly ''Royal'' in it's sentiments (where Merchants and Workers mostly lived). They had very little by way of ''self defense'' (only 6 Cannons). Despite a valiant effort to withstand The Rebel Army, Norfolk was overtaken. The 2nd largest City in England at the time was in Rebel control! However, this was a short lived victory. The approach of The Royal Army (much more trained and highly disciplined) – attacked. Their Artillery and Cavalry swept the streets of Norfolk – and The Rebels mounted a weak defense, but were able to hold.

As reinforcements moved in to support The Royal Army, much of The City caught fire as a result of the Artillery. The Royal Army took the advantage and (bayonets at the ready) – pushed through street after street. Blockaded into a subdivision of The City known as Dussindale, they surrendered. It is estimated that over 3,000 Rebels died in The City. Over 300 captured were quickly hung. In time The Edict that Edward refused to repeal would be (but long after His Reign). 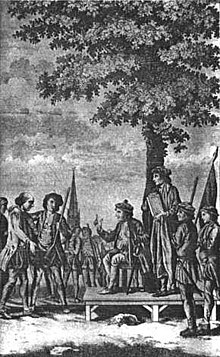