Also known as ''The Death By A Thousand Cuts'' – The Chinese Practice known as ''Lingchi'' was first recorded in the 9th Century AD, as a means of corporal punishment for specific persons. The practice was akin to European Flaying, which was the slow removal of the upper layer of a victims skin. Various European Religious Martyrs were also said to have been tortured and executed in this manner as well.

While Flaying concentrated on the removal of layers of skin, Lingchi placed more emphasis on small cuts to the body, deep enough o cause pain, but not overt bleeding (which defeated the torture). The placement of cuts to various body parts was done so as to steadily increase the pain – but keep the victim alive, for at times MANY weeks. An Executioner who was well versed could place hundreds of small painful cuts to a victim with great care and skill. When suffering was seen as complete, normally – the throat was simply just cut, allowing the victim to die. Finally, the body was dismembered, often ''fed'' to animals. Treason was the most common Crime that could earn Lingchi.

Seen as an Imperial punishment metted out more as threat that actual fact (by some Historians), documents cite that such a torture and execution method was banned in 1906 by the then Chinese Government. 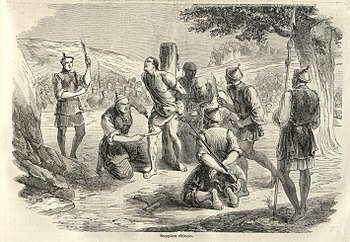