The ''German Legion'' was another Foreign Volunteer Military Formation, raised to serve in The Napoleonic Wars. It was mustered in 1803, and was one of the longest serving Foreign Volunteer Regiments fielded. The Regiment would fight throughout England's involvement in The War until 1816. With the dissolution of The Electorate of Hanover (Germany), The Legion was recruited from the remnants of The Electorate Army. Over 14,000 Officers and Men served within The Legion and composed (10) Formations of Infantry, (6) Batteries of Artillery, (1) Corps. of Engineers and (4) Regiments of Cavalry (Regular and Dragoon Classes). The Regiment was also unique in that both German and British Officers commanded.

The Legion was a British mainstay through The Peninsular War (1807-1814) and would also serve at The Battle of Waterloo (1815). They held a smaller Farmhouse near La Hayne, under constant French Artillery assault, they remained until a massive French Cavalry charge finally moved them, with losses of 800 killed and wounded. The German Legion was one of the most celebtated of Foreign Units that served The British Effort during The War. The Legion wore ''The British Scarlet'' and both Buff and Gray Trousers. They Cavalry wore a Green color. All equipment used were standard British Infantry issue. 5,000 ''Veterans'' would survive The War. 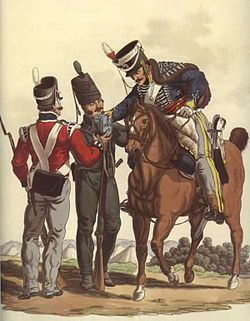