Entirely experimental in scope, the proposed US Lockheed-Martin X-44 ''MANTA'' (Mulit-Axis No Tail Aircraft), was first discussed in the late 1990s and early 2000s as a possible 6th Generation US Fighter. Without Tailplanes or related Avionics, The X-44 was to relay on Thrust Vectoring for stability in flight. This was a radical departure to traditional Aircraft design. A one-piece design, ''MANTA” featured no exterior structures. Much of it's overall design came from The US F-22 ''Raptor''. Featuring a much larger design, weapons payload was to be much greater. This was to increase it's effectiveness as both Fight and possible Long Range Strategic Bomber. Cost proved too prohibitive, and only Artist renderings were ever attempted before The Project was canceled in 2001. No proposed specifications were made available. 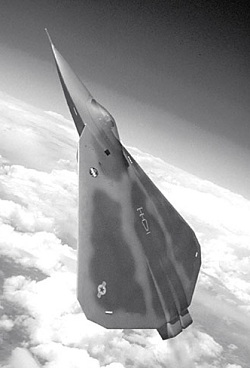