Vagabonds and Beggars Act of 1494

Under England's King Henry VII – Parliament passed an Act of Law, meant to curb ''Vagabonds, Beggars and Persons of no substance''. While then giving of Alms was accepted (as with Almshouses and Church sanctions Charities), London – being a large City, suffered from many thousands of homeless poor. So many in fact, that many resorted to ''criminal activities and acts of thievery''. The ''Vagabonds and Beggars Act of 1494'' was designed and enacted to control this problem.

The general punishment from violation of The Act was for the Convicted to be placed in Public Stocks for a period of (3) days. Only Bread and Water was given (and often not even this). Afterwards, the Convicted was exiled back to their ''Hundred'' (or Region of Census). Should the Convict be caught in violation again, Public ''Scolding'' (Whipping) could be given. IF another following violation was found – death was the remedy. The Act was somewhat successful until more and more people came into London and it's surrounding Districts. Jailing for prolonged periods was the norm for Vagrancy from the 16th Century forward. By 1823, England had repealed The 1494 Law in lieu of fines and imprisonment. 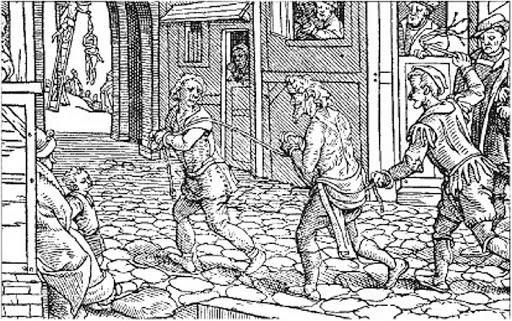