In 14th Century AD England, The Coterel Gang were a Group of Outlaws (Brigands), who terrorized The North Midlands. Led by James Coterel, at their height – they may have numbered as many as 100 Men. Taking Noblemen as ransom was a common tactic to illicit monies, when The Gang kidnapped a Royal Justice of King Edward III, the full weight of ''Royal Outrage'' was brought to bear against The Gang. Despite The King placing a high bounty on them, The Justice's Family still paid the 1,300 Pound Ransom.

It would be The Second Scottish War of Independence (1332) that spared The Coterel Gang. All Military resources were diverted to Scotland and The Borders. Seeing perhaps an ''opportunity'', King Edward offered Pardons, which were taken. Some Historians cite that The Gang even became Militia under The Royal army against Scotland. After The War, James Coterel would become a wealthy Merchant. It is also suggested that some of The Coterel Gang's exploits may have helped spur the Story of ''Robin The Hood''. 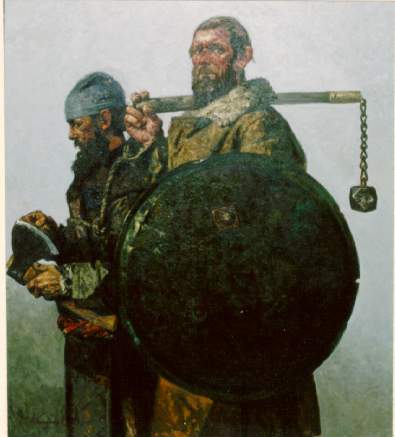