In it's Medieval form, The Dais was a type of elevated or raised foundation (platform), upon which was placed, normally a Throne. So elevated, The Dais served to reinforce the theory of a Monarch's position placed ''over His Subjects. A Dais was raised to sufficient height to force those on floor level to ''look up'' and conversely, a Monarch to ''look down''. They were made of milled and masoned Stone. Developed in the 15th Century AD – with some examples built at 6-feet (normally 2 to 4-feet was seen as ''standard''), Royal Dais were ceased in 1600 AD in England. The use of Wooden Dais as platforms for Honored Guests or Military Review began around the 1700. Smaller speaking Podiums incorporate a type of small Dais – even today. 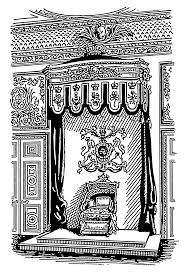