Perhaps one of the oldest forms of Law Enforcement procedures known, the System known as ''Hue and Cry'' (in it's ''modern'' form) dates back to the 12th Century AD. It was a protocol by which a City, Town or Village Guard would alert anyone nearby – to ''come to His assistance'' (help). The process could also be used to summon Military Aid. In Roman Times, Guards stationed on High Walls or used a Far Sentries, if they saw ''trouble'' would either ''cry out'' or ''give warning'' with a Rattle or Horn – to summon help or reinforcements (Hue).

Before organized Law Enforcement, City Guards would wander through the streets at Night – often only armed with a Pike (sometimes not even that). Carrying a torch, they searched for Criminal Activity. Should they find it, they would ''call out'' or make '' a commotion'' – until help arrived. Still later, Rattles and Whistles were used. In organized early Law Enforcement, the ''Hue and Cry'' System would be used to summon either Citizen help or other Law Enforcement. In The United States, this would evolve in to the early form of ''Posse Comitatus'' or the deputizing of Citizens to assist (officially) in Law Enforcement activities. 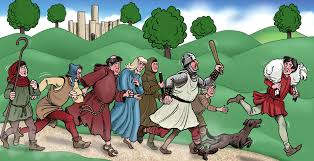