A 10th Century AD Male garment, The ''Cotte'' is best described as an elongated ''shirt'', worn as an outer garment. They bore a similarity to the Roman Tunica in many ways. Material was dependent of if The Cotte was made for Noble or Commoner (who emulated The Nobility in clothing style often). Half-sleeved (or in some variations, none at all), The Cottle would – by the 16th Century, be adopted as a type of Women's clothing. Both Male and Female versions were also made according to The Region of wear. In Central Europe, The Cotte was shorter (waist) and in Eastern Europe – longer. The style would cease completely around the 18th Century, regulated to ''Commoner's'' Clothing by them. Some early Nobility style had Cottes fashioned from silk, with reinforced cotton or quilted backings (for a layer of warmth). 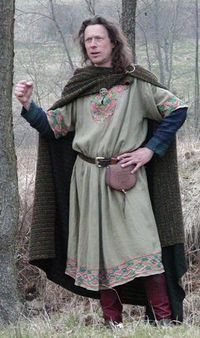