Part of The ''Fortress'' or ''Castle'' – Class of Chinese Warships, The ''Louchuan'' – Class was specially designed for Boarding Enemy Warships as well as service as a massive platform for Siege Weapons, such as Trebuchets. The ''Louchuan'' Ships were seen in used from the 6th through 12th Centuries AD. Made of Wood framing, and covered in iron plating, the typical ''Louchuan'' could range from 400 to 600-feet and displace 1,000-tons. Beams ranged from 20 to 35-feet.

Specially designed torsion Trebuchets and related Catapults were erected and locked onto the massive Decks. Some featured as many as 6 to 8. Often, hundreds of Archers lined the Decks with access to flame (Fire Arrows). Also, primitive Firearms were given to Riflemen (11th Century) – who would augment The Archer. Commonly, a Crew of 800 was not uncommon. These were used mostly as Rowers in the Lower Decks. The Class also used Sail Rigging, but these were somewhat impractical due to the weight of The Ship. The ''Louchuan'' Vessel could support 1,000 soldiers as well. Obviously not many of these ''Monster Ships'' were built. The most common problem was in steerage and handling, as well as being able to survive a storm at Sea. As such, The Louchuan Vessels were scrapped in the 13th Century. 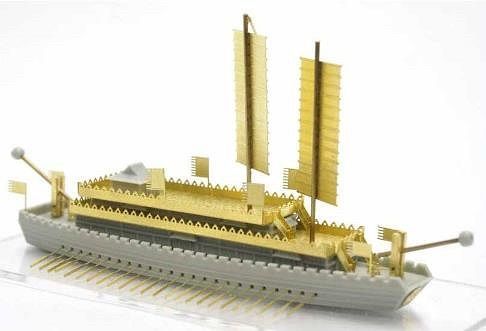