Issued to The British Army and Navy for Military Service during The Anglo-Egyptian and Sudan Wars of 1882-1889, The ''Egyptian Service Medal'' was given to all Ranks. In addition, it was one of the few Service Medals awarded to Females (Nurses) for their service aboard a Hospital Ship anchored off Alexandra (Egypt).

A Silver Device which featured the Profile of Queen Victoria, the Reverse featured a Sphinx. The word ''EGYPT'' was placed on the Top with the year of Medal issue (during the prescribed issuance) was engraved. The Ribbon was a series of Blue and White Stripes. A total of (13) Campaign Clasps with the name of the particular Action, was placed on The Full Ribbon/Medal Versions only. 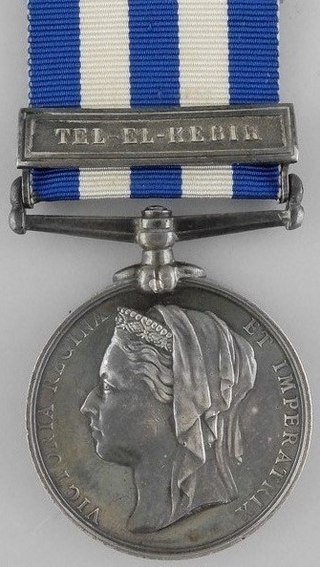