The ''Wide Awakes'' were a political group established by young United States men from the Northern portion of The Country, in 1860. They were supporters of the newly formed Republican Party and avid Lincoln constituents. The Group called themselves ''Wide Awakes'' for their ideology that the youth of America (in particularly The North), needed to remain vigilant in politics and ''strive to remove'' the Older established Political Parties of their forefathers. Their ranks, which were joined by young men as a ''Club'', requiring Membership monthly and the purchase of a Club ''uniform''. This was a black full length robe and military style cap, as well as a 6-foot long lamp pole. Onto this was affixed a copper oil pot (lantern). This was used to ''light the way'' when Club members met at night time and at rallies.

The ''Wide Awakes'' used a large human eye (without lids) – which featured into their ideology – as their brand. This was used on all forms of communication to include posters espousing The Republican Party. And while not overtly violent, several incident did reach National attention. One, in The state of Illinois – involved two Chapters of The ''Wide Awakes''. One supported Lincoln and the other Stephen Douglas (Lincoln's adversary for the Republican nomination for President). Clashing with fists, pistol shot were reported and several men were injured. In The South, The Group was not popular and seen as ''agitators''. When The Civil War began in 1861, many ''Wide Awakes'' joined The Union Army to fight. However, some Clubs would still advance their Republican support. After 1865, most Groups disbanded. 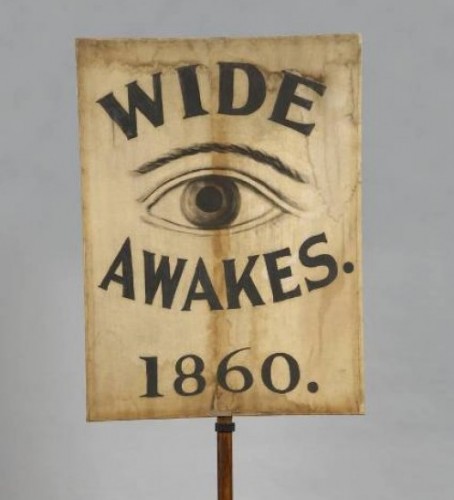