The ''California Battalion'' was a Volunteer Militia Formation, raised in Alta California to fight in The Mexican-American War (1846-1848). Commanded by Regular US Army Officer Lt.-Colonel John Fremont, they were the primary Military Force established after California ''declared'' itself against Mexican Rule (at least among American Settlers). Fremont was to report officially to US Naval Commodore Robert Stockton (who operated several US Naval Warships along The Coast). The two were at constant odds with one another. Fremont was more out-going and brash (at time flamboyant), often disobeying Stockton.

Much of California was ''mapped'' fro The US Government by Fremont's Cartographers – providing (later) much necessary Territorial geography information. The Battalion took The City of Los Angeles from a small Force of Mexican Lancers and Militia in 1846 (without bloodshed). Leaving a small Garrison behind, these Men managed to mishandle their occupation and The City would fall under control yet again (briefly) to Mexican Forces – at least until Stockton and His Warships arrived. Threatening to shell The City – it surrendered a final time.

The Battalion would fight in several small skirmishes throughout California. Their primary Mission was to keep the principle Northern California Trails open for impending Settlers into California from The East. In the beginning, The Battalion was roughly (600) Volunteers which rose to 1,500 at one point. After The War, and California was declared a US Territory – The California Battalion was disbanded. 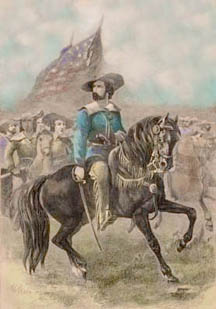