''The Letters of Last Resort'' were created after World War II in 1945, by The British Ministry of Defense, as a means of giving Ship and Submarine Commanders the ability to ''follow Orders'', which were given prior to deployment. These written Orders, were to only be opened (kept under lock and key), in the event that competent Naval Command or Government Leaders could not be reached. The ''Letters of Last Resort'' would take on a far more ominous role with the Nuclear Fears of The Cold War.

In the mid-1960s, The ''Letters'' were issued only to British Nuclear Submarines. Safeguarded until a confirmed Nuclear Attack against England occurred, The Captain and His Executive Officer (who maintained Access Keys), would both be needed to access The ''Letters''. Specific deployment and counter-reactions (Nuclear Launch) were listed, as well as final Orders for The Ship involved. Traditionally, should Radio and related Communications be unconfirmed for a period of 4-hours (due to lack of communications expected during a Nuclear Attack), The Captain and Executive would ''open'' The ''Letters'' and carry them out. 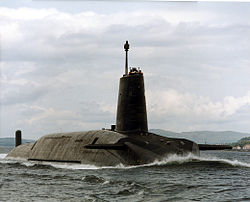