Built under commission of King Edward I in 1277 (as a result of The First Welsh Wars), Rhuddian Castle is located Denbighshire, Wales. It was completed in 1282. Originally designed as a Concentric-type, it eventually became more “diamond” in shape. Featuring 4 Round defensive Towers, Rhuddian also had twin Block Gatehouses for controlled access. A 10-foot thick Curtain Wall encompasses the entirety of the Castle. The Inner Ward held a Chapel, Great Hall, Living Quarters and other support structures needed. Being next to The Clwyd River, a man-made Channel was dug which allowed shipes to supply the Castle directly (when needed). This Channel was possibly protected by a wooden Palisades System. Besieged several time, Rhuddian Castle never was successfully captured. Surrendered in 1294, it came into English hands. King Richard II was said to have stayed there. In 1400, Welsh Forces attacked Rhuddian Castle, it was severely damaged (but later rebuilt in the 15thCentury). During The English Civil War, Royalist Forces held Rhuddian until besieged in 1646. Captured, in was ruined by Parliamentarian Forces (after capture). Never rebuilt, it was completely destroyed (as evidenced by reports from 1781). It was later renovated to prevent total deterioration in the late 19th and 20th Centuries. 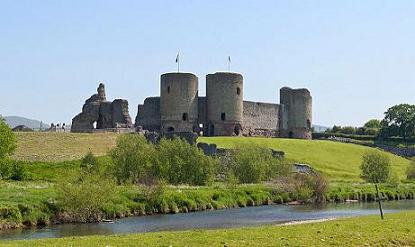