Built under commission of William The Conqueror in the 11th Century, Lincoln Castle id located in Lincoln, England. Of Norman design, the castle was sorely needed by Williams administration due to the “hostile” nature of the populace (Norse descent and adherents to Danelaw). The castle is of a Squared design with a Central Keep (originally). Conquered by the earlier Romans, many of their previous fortification foundations and roads still existed (and came in to use for The Normans). Due to it's strategic location, Lincoln guarded several main roads.

Possibly completed in 1068, Many Round and Squared Defensive Turret Towers were added to the perimeter walling. Lincoln Castle first saw battle during The Anarchy Period. The Town of Lincoln was attack by King Stephen Forces (against his Aunt, Empress Matilda). The Town was burned, but the castle withstood the siege (with only damaged Towers). Again, during The First Baron's War (1217), the castle was attacked by the Forces of King John. A new Barbican and Gatehouses were constructed during this period. In 1787, a Prison was built at Lincoln Castle.

Used as a “Debtors Prison”, it was quite active. By 1878, the Prison was closed. Used once again in the 19th Century as a Prison and place of execution, the noted “Executioner” William Marwood – developed his “long drop” method of hanging at Lincoln. Prior to a “”dedicated Courtyard” for executions, people were hanged from the tallest Bell Tower of the Castle (so all in Town could see). By 1872, execution's stopped. With much of The Town of Lincoln built up to the castle walls, much of it's original appearance is blurred. The general perimeter walls are still intact and several Museums now occupy many of the surviving buildings. 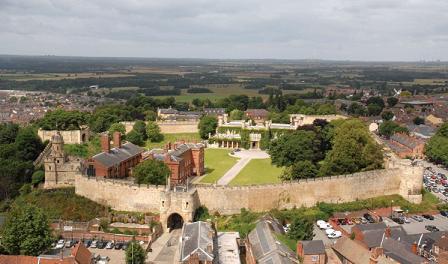