Located in Blagaj, Bosnia and Herzegovina – Blagaj Fort as a Medieval defensive structure, may go back to 948 A.D. Before this, proof exists of Roman Forts at the location. Due to the placement of Blagaj on a granite outcropping some 300 feet tall, it is easy to see it's strategic importance. Polygon-shaped, Blagaj Castle was surrounded in moderately high Defensive Perimeter Walls (8 to 10 feet thick, in some places). Due to the limited space at the top of the mountain, only some 1,700 feet were available. The entirety of the castle was built skyward. It is speculated based on ruins found, that a substantial Palace may have existed within the castle (possibly around the 6th Century). However, due to an unknown explosion (possibly by gunpowder) – in the late 18th or early 19th Century, a vast majority of Blagaj Castle was destroyed. A sizable Necropolis has also been discovered (possibly denoting Noble use). Dating back to the 6th Century, this is one of the oldest graveyards in the Region. Since 1965, Blagaj has been protected as a historical location. 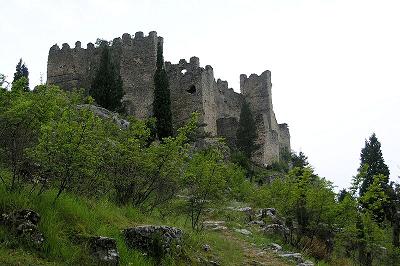