Located in Montgomery, Wales – Montgomery Castle was originally a wooden Motte and Bailey defensive structure, built around 1071. A Welsh Civil War (between ruling Barons), caused Montgomery Castle to be besieged in 1215. The entirety of the Castle and all supportive structures were burned and razed. Around 1300, a stone defensive structure was built and completed on the birthday of King Henry III. A Donjon was designed – as was up to 4 Horseshoe Defensive Towers. A 10 foot Curtain Wall was erected (as was a Guardhouse/Drawbridge).  Large Outer Wards were later constructed. Montgomery Castle served as the location for peace negotiations between England and Wales (set up by King Henry III and Welsh Prince Gruffudd). As a result of successful talks, Gruffudd was bestowed the Title “Prince of Wales”. After The Welsh Wars, Montgomery somewhat faded from active military use. Still lightly Garrisoned, it was used as a Military Prison. With another Welsh Civil War (1402), the Town of Montgomery (born out of the Castle), was attacked by Rebel Forces under Owain Glyndwr.  Sacked and burned, he could not successfully besiege the Garrison at Montgomery Castle. The Town was never rebuilt. Montgomery Castle was loyal to King Charles I during The English Civil War. It surrendered to Parliamentarian Forces in 1643. It was ordered demolished by Parliament. What remains today are total ruins (but conservation has preserved much). 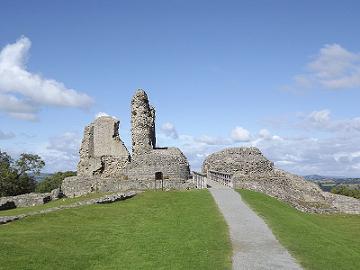