The Temple of Jupiter Stator was located on The Capitoline Hill, in Ancient Rome. It was said that, during The Kingdom Era (753-509 BC), King Romulus had The Temple constructed to honor The Roman victory against The Sabine Peoples. The Temple was dedicated to The God Jupiter. Made of marble, it may have stood 150-feet above a 75-foot step platform. (8) Facade columns marked it'd entrance, with (120 more on either side. The Goddess ''Victory'' was placed in a War Chariot, on the roof. It is unclear just when The Temple was demolished. Possibly during the early Republic Era, no traces were known. In the 15th Century, on it's Site – a Defensive Tower was erected. In 1827, when this structure was demolished, ruins of a massive foundation was found – which most felt were the remains of The Temple of Jupiter Stator. However, it is unclear if any of the marble was harvested for no records indicate as such. 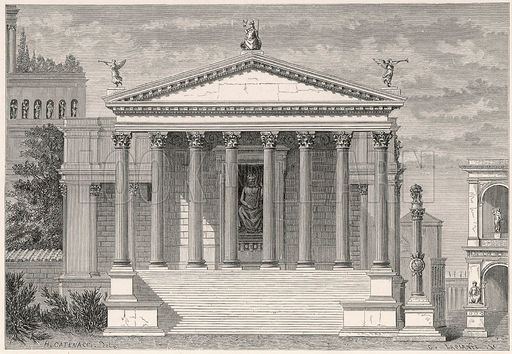