A Component of The Ancient Greek (Macedonian) Army, The Sarissophoroi were a Formation of Light Cavalry. While they were not used in the traditional function of Cavalry (more as Mounted Infantry), The Sarissophoroi used a similar Long Spear that Infantry deployed with – The Sarissa. And while some examples of Charges were known, on average, This Formation would dismount to fight. While on active Scouting (which was a function The Macedonians excelled at) – The Unit carried the smaller Javelin.

These Formations were composed of Sons of Macedonian Nobles (as only they could afford a Horse and to be able to maintain it). Linothorax Breastplates and Helmets were used. Swords and small Oval Bucklers were carried as well. A Company consisted of 150 Horsemen. The Sarissophoroi were a crucial component in Alexander of Macedon's victory at The Battle of Gaugamela (331 BC). They were disbanded in 329 BC, after the decline of power within The Macedonian Army. 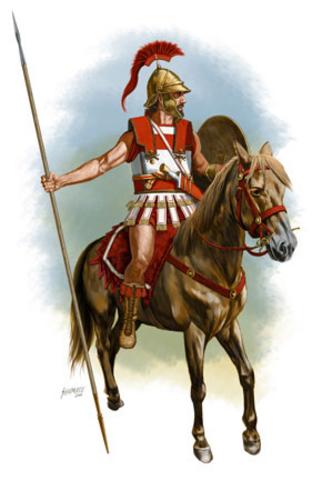