William Henry Roberts had so many ''names'' it is hard to keep track. His most known nickname was ''Brushy Bill'' Roberts (referencing His rather long and thick moustache ). William would go down in Western History for another more unusual claim. William Roberts ''claimed'' to be none other than William Bonney, aka ''Billy The Kid''. He made this claim at the age of 71 years in 1948.

Legend states that ''The Kid'' was gunned down by Sheriff Pat Garrett in 1881 outside Fort Sumner, New Mexico Territory. However, since that time, many stated that Pat (more or less considered a ''friend'' of Billy's) – did not kill Billy, and that the person He shot was someone else. As such, one of the ''greatest'' Outlaw personas of The American West, not only escaped Justice – He went on to live a very ''long life'' – ''somewhere'' in The United States. ''Proof'' given was that at the time, no photographs were taken of Billy's corpse (which was already sealed inside it's coffin when buried by Family).

William Roberts was a known ''Old Coot'' Prospector in Texas. ''He'' had made such ''claims'' as being ''The Kid'' for years. Most people simply ''brushed off'' the Old Man's claims as senility and ''brag'', However, when His ''story'' came to light in a state Newspaper, it gained national Attention. A Private Investigator from The East decided to track down Roberts, and ''get to the bottom of the matter – one way or another''.

Roberts did seem to ''know'' things only Bonney would have. However, much of Bonney's Life had been documented by many Writers (both fictional and otherwise). The ''information'' could have been readily available to anyone. However one telling fact was that Roberts claimed to have been born in 1859. He would have been in His 90s and not 70s (as He was at the time of His interview by The Investigator). Roberts also stated that He was ''part'' of the infamous Jesse James Gang as well. The James Brothers were well ''aware of who Roberts really was''.

Dying from a heart attack in 1950, a Medical Examination showed at least (26) wounds from knife cuts and gunshots (very odd for a Prospector, but not for an Outlaw like The Kid). The wounds did seem to ''verify'' His ''story'' about ''riding with The James Gang'' (who suffered such wounds on a regular basis due to their Bank Robbing). The story laid there until 1990, when The Hollywood Western ''Shoot 'Em Up'' ''Young Guns'' was released. The film directly relates Roberts story to The Investigator. As a result of the renewed interest sparked, several other investigations were conducted.

Th first looked into a photograph of Roberts (again taken in 1871). Using Forensic Photographic techniques in common usage (now), after comparison with the only known photograph of The Kid was conducted. It was determined that the two photos were ''93% similar''. This meant that Roberts was possibly ''telling the truth'' or at best – may have been related to William Bonney. The final 2004 investigation involved the exhumation of Bonney's remains (and that of Roberts) and conduct a DNA trace comparison. Herein lies the ''snag''. Although Billy The Kid was ''laid to rest'' outside of Fort Sumner, New Mexico (as states His Headstone) – Billy's body has never conclusively been determined to ACTUALLY buried there. Without proof of Billy's actual remains – no Judge will grant the Order to Exhume. 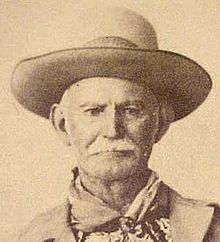