A colorful personage from American Western History, Ellis Alfred Swearengen (better known to His friends as ''Al''), was one of eight children born to a Dutch Farming Family in Iowa – in the years 1845. Al would stay in Iowa, distastefully working as a Farmer for most of His adult life. It was only in 1876 that He left Farming to seek His ''infamy'' in the equally infamous Town of Deadwood, South Dakota. As we have seen, Deadwood was perhaps one of the worst ''holes anyone could fall into'' in The American West. Al Swearengen would thrive there.

Having a talent for controlling Deadwood's more ''seedier elements'' – Al built a wooden shanty and christened it ''The Cricket'' Saloon. Watered down drinks, cheat Gambling – Al offered it all. And Al made a lot of money from well paid Buffalo Hunters and Gold Prospectors. His cash intake allowed Him to build ''The Gem'', the premium Saloon and Brothel of The Territory.

Al's other ''talent'' was recruitment of ''Working Girls'' for His Brothel. Often, Al preyed on young women ''down on their luck'' or trying to make an honest living. Al pretended to be a ''concerned, Father figure'', giving them a place to live and food – in exchange for ''honest work''. Before long, the girl in question was a working Prostitute. Famed Scout and Western Frontierswoman Mary Jane ''Calamity Jane'' Canary was said to have worked as a Dancer for Al, and was one of His best ''recruiters''.

Al controlled local politics quite well until He ran afoul of ''new'' Town Sheriff Seth Bullock. He cleaned up the Town – arresting many of Deadwood's more ''colorful'' Outlaws. Bullock could never quite get a charge to ''stick'' on Al. In 1879 a fire broke out and spread thru the mostly wooden constructed Town. Over 80% of Deadwood burned down, including ''The Gem''. Al simply rebuilt it – at one point the only standing building in Deadwood. Al made money ''hand over fist'' despite new Laws and The ''Wild West'' slowly giving way to a more ''modern'' way of life. In 1899, ''The Gem'' caught fire yet again. This time Al did not rebuild.

Al's colorful and carefree life took Him to The City of Denver, Colorado in 1904. some say Al was broke (He had a Gambling problem by this time). Other say Al was ''doing well''. But Al had made many Enemies in His life. Perhaps it was one of these who bashed His Head in and left Him dead in a back Alley at the age of 59. 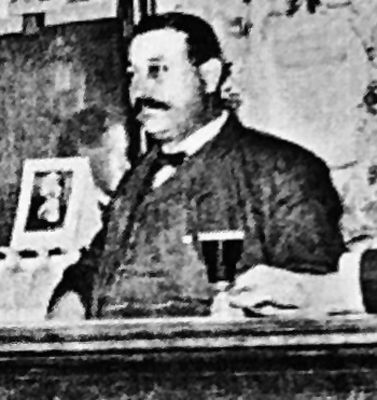