Although His name is unknown to most, Chalkley Beeson (or simply ''Chalk'' as He liked to be called). Was an example of how a Man made His fortune from nothing and would be not only well respected, but well known to most in The 19th century American West. Born in Salem, Ohio in 1842 – Chalk's Family would move to the Cattle Country of Iowa. It was here that Chalk found His first real employment as a Cowboy. He would eventually relocate to Texas, where His reputation as a ''good'' Cowboy grew. In addition, Chalk became well know as a Hunter-Scout, and served as a Private Guide for several well known American Military figures – Phil Sheridan and George Custer. Chalk's reputation was such that when The Imperial Prince of Russia Alexi Alexandrovich came to The US to experience ''The West'' – He asked for Beeson.

Becoming bored with His Plains Life in 1875, Beeson moved to the Mecca of The American West – Dodge City, Kansas. As we have seen – Dodge City was (at times), a ''dangerous Town''. To Beeson's luck, a Pool Hall Owner owed Him money. Unable to pay, The Owner turned over paperwork to The Dodge City Saloon (which Beeson re-named The Saratoga). Beeson had a new vocation. Married soon after (although His Wife did not agree with His chosen Position), Beeson made a handsome profit with The Saloon.

Well off, Beeson would buy a ''down on it's luck'' rival Saloon known as The Long Branch. Refurbished and made to rival East Coast establishments of a ''High Clientele'', the later famed Long Branch would become the ''Model'' for what generations would identify as a ''typical'' Western Saloon (to a point). Beeson also created a fixture of the later 1920s and 1930s – The Cowboy Band. In 1884, Beeson hired skilled Musicians to play throughout The Territory, dressed in ''gaudy'' Cowboy regalia. This genre style would become popular and continue so as an early foundation of American Country Music. However, Beeson never saw it that way. He would eventually sell His Managership of The Cowboy Band in 1886 for a paltry $750 USD.

Still well off, a now (again) bored Beeson and Family moved from Dodge to Ford County. At 43 years old in 1891, He would take on another career – that of Law Enforcement, or Sheriff of that County. After a well publicized gunfight that He and His Posse had with a band of noted Outlaws (which involved Beeson being wounded), He retired from this position in 1896. He bought a Cattle Ranch and settled into yet another vocation.

In 1912, while riding a particular ''rough'' Horse, Beeson was thrown from the saddle. Hitting His head, Beeson would die several days later of the injury. However, His Widow maintained His memory for many years. Future Family would do likewise, with the large Western artifact Museum open in Old Dodge City. This Museum featured much of the memorabilia gathered by Beeson over His years in The Town. The Museum was maintained until 1964. Many of His collection pieces are now in possession of The Dodge City Historical Society. 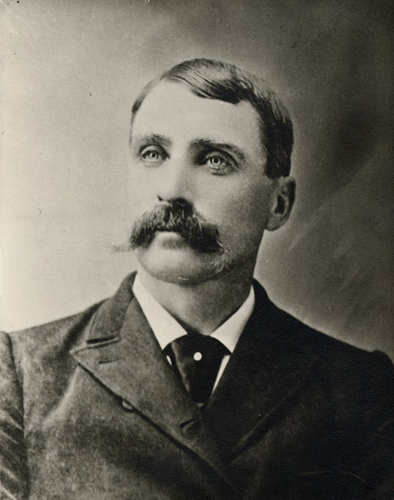